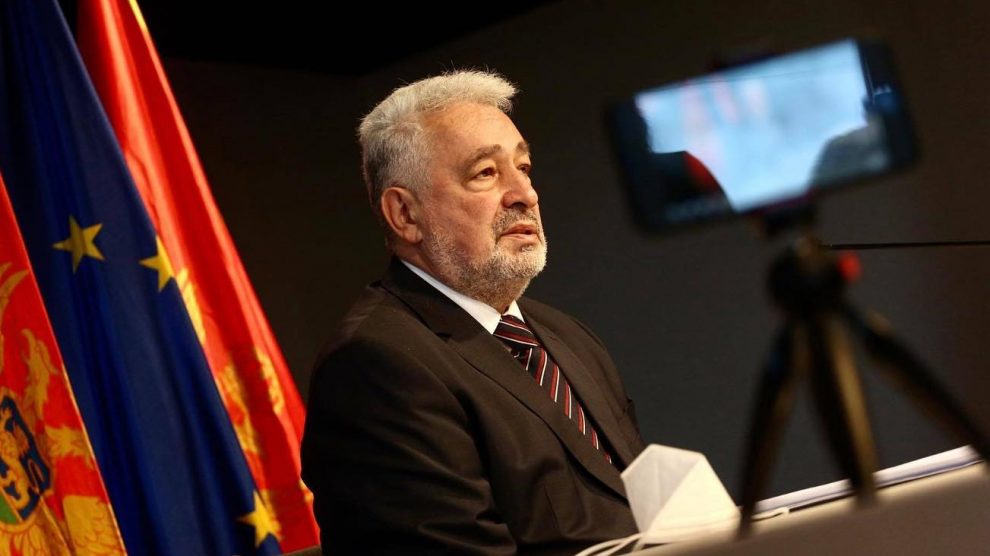 The technocrats now in charge of Montenegro will need to show that they are capable of overcoming old divisions to stay in office. A controversial census scheduled for next year will be their first test.

A new government took office in Montenegro on December 4, the first in almost three decades that does not include the Democratic Party of Socialists (DPS) led by the country’s president, Milo Đukanović.

Now, for the first time, the DPS will be in the opposition.

And yet an opposition role for the DPS is not the only novelty for Montenegro: the new prime minster, Zdravko Krivokapić, as well as almost all cabinet ministers,  do not belong to any political party. The only exception is Dritan Abazović, the new deputy prime minster and leader of the United Reform Action (URA) party.

For the the first time in thirty years, Montenegro has what is called an expert or a technocrat government. Prior to taking office, Mr Krivokapić (pictured above) was a mechanical engineering professor at the University of Montenegro. The new minister of justice, Vladimir Leposavić, is a lawyer who served as senior legal advisor to the Metropolitanate of Montenegro and the Littoral, the largest Serbian Orthodox Church diocese in Montenegro.

This represents, at least on paper, a huge change for Montenegro, a country whose previous governments were all led by the DPS and Milo Đukanović in coalition with minority parties.

But this time, the DPS’s longstanding strategy failed, and the party was left just one seat short of being able to form a government. However, while the DPS is now the opposition, its leader Mr Đukanović remains president until 2022 when the next presidential elections are scheduled.

Daliborka Uljarević, the executive director of the Podgorica-based Center for Civic Education, tells Emerging Europe that Montenegro is now set for a period of adjustment.

“Everything that’s happened in the months since the [parliamentary] election is part of a difficult adjustment process in which the majority now finds itself a minority and vice versa,” she explains.

Ideological heterogeneity is a hallmark of the now ruling coalition that includes both the very pro-Serbian For the Future of Montenegro and the more pro-European Peace is Our Nation, the two big-tent coalitions that formed just before the August elections.

For now, according to prime minster Krivokapić, the main priorities of the government will be economic policy, consolidating the public finances, and repealing a controversial religion law — the main cause of protests and instability in Montenegro over the last year.

But when it comes to the new Krivokapić-led government, time will tell just how technocrat and non-partisan it will turn out to be.

“He [Krivokapić] did typify his government as a technocrat one, but that doesn’t meant it really is and there are some very problematic aspects [in the government],” Ms Uljarević says. “Still, it is good that after many decades the DPS will not be in the government, as they have had the time to show what they do and do not know, and it’s time that Montenegro, through changing governments, finally gets one that will capable of leadership.”

The DPS will have to adjust to a new reality

When it comes to the future of DPS and the role Mr Đukanović will play in the future, Ms Uljarević points out that DPS will need to adapt to the new reality.

“DPS is currently in a specific situation as it is facing a new experience of electoral defeat, but also one of the consequences of a lack of internal democratic processes and maintaining a strongman cult of leadership,” Ms Uljarević says.

She expects that any transformation of the DPS will come in phases, mostly likely to begin at the party’s congress in January.

“…for them as a party it will be key which faction will take leadership: the hardliners led by controversial officials or the one led by younger cadre that has the ability to broaden the coalition potential of the party,” Ms Uljarević explains.

Still, with or without DPS in charge, Montenegro remains a deeply divided society, along lines which many commentators have described as pro-Serbian vs pro-European.

Despite his autocratic tendencies, Mr Đukanović was seen as a pro-Western leader and presided over Montenegro joining NATO in 2017.

Some worry that the new government, especially because of the presence of the Democratic Front, a party recognised as pro-Serbia, could somewhat abandon this course. Still, Ms Uljarević doesn’t believe that Montenegro’s independence will be threatened, and it’s more likely that the new government will focus on its own problems rather than on any explicit pro-Serbian politics.

“Montenegro is an old European country, as is Serbia, and the future of the two lies in mutual respect and recognition. I think the relevant actors in Montenegro understand that, and the relevant Serbian actors will have to accept that,” she says.

The relationship between Serbia and Montenegro, once two republics of the same country, has been strained in the last few years. This strain came to a head last year with the Serbian Orthodox Church led protests against a religion law that it maintained would eventually lead to church and monastery buildings being expropriated by the government.

Then, while the new government was still being formed, the Montenegrin ministry of foreign affairs decided to expel the Serbian ambassador Vladimir Božović over remarks about the Podgorica Assembly, which following the end of World War I formalised Montenegro’s unification by Serbia.

The unification, or as many in Montenegro see it, annexation, of Montenegro to Serbia in 1918 has been controversial in the country ever since independence in 2006.

In 2018, the parliament of Montenegro decided on a resolution to annul the decisions made by the Podgorica Assembly one hundred years ago.

According to the decision of the foreign ministry, Mr Božović had meddled in the sovereign affairs of Montenegro by stating that the decisions of the Podgorica Assembly were “a free expression of the people’s will to unify with brotherly Serbia”.

While the international community has called on Montenegro to reverse this decision, the ministry has stood by it.

It seems that in the relationship of Montenegro and Serbia, as soon as one controversy is put to bed, a new one surfaces immediately. After the religion law, and after the ambassador kerfuffle, it’s the impeding 2021 census that promises to yet again ruffle feathers across ethnic and religious lines.

Some civil society organisations have appealed for the three questions to be removed from the census, as they are not, at least according to the EU’s standards, necessary. Indeed, many EU countries choose to omit them. It is unlikely that this will happen, however.

“Sadly, there are already indications that next year’s census will be yet another nationalist battleground which is a consequence of an underdeveloped political culture and the irresponsibility of certain political groups,” says Ms Uljerević. “The way that the new government will deal with this issue will show if it has true reformative potential and the capacity do this work [the census] in a professional and resilient manner in relation to various influences.”

The Serbian president, Aleksandar Vučić, will be keeping an eye on the census as he has said that it is important for Serbia, especially that the number of Serbs in Montenegro doesn’t decrease.

In the end, despite a historic change in Montenegro, all the old problems remain. An unlikely alliance across the political spectrum has managed to defeat DPS, but rifts along ideological lines as well as a rocky relationship with Serbia will be challenging for the technocrat government led by Mr Krivokapić.