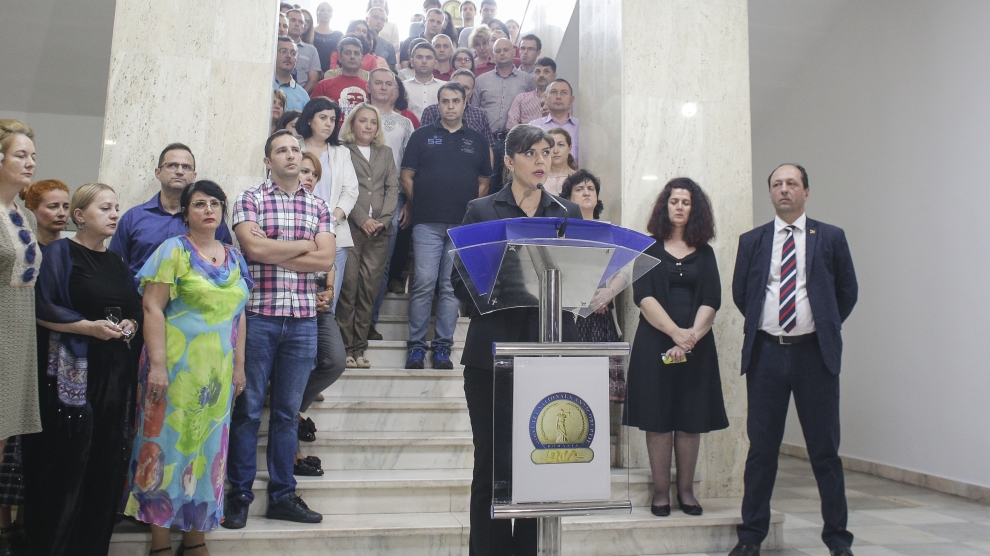 The fight against corruption in Romania was dealt a severe blow on July 9 when the country’s increasingly weak president, Klaus Iohannis, fired Laura Codruta Kovesi, the boss of the anti-corruption unit, the DNA.

The president’s decision ends months of tension which began in March when Romania’s Justice Minister Tudorel Toader formally called on Mr Iohannis, to dismiss Mrs Kovesi from office. After the president refused to do so, the case was referred to Romania’s Constitutional Court, which ruled in June that Mr Iohannis was obliged to fire Mrs Kovesi. The ruling PSD-ALDE coalition had repeatedly threatened Mr Iohannis with suspension should he delay firing Mrs Kovesi any longer.

“Mr Iohannis has repeatedly stated that he respects the rule of law and as such is obliged to follow the ruling of the constitutional court,” said Madalina Dobrovolschi, the president’s spokesperson, announcing the decision to fire Mrs Kovesi.

Augustin Zegrean, a respected former head of the Constitutional Court, said that the president had little choice.

“He did what he was obliged to do,” said Mr Zegrean. “The was nothing else he could do.”

However, many of the president’s erstwhile supporters were furious. The comments on his Facebook page were vicious: “You are a coward and you have lost my vote,” was one of the more polite.

Since taking over at the DNA in 2013, Mrs Kovesi has overseen the prosecution of thousands of corrupt politicians. Mayors, MPs and even former prime ministers have been found guilty of graft and sentenced to prison on her watch. Most recently, Romania’s de facto prime minister, Liviu Dragnea, the leader of the PSD, was sentenced to three years and six months in prison for abuse of office. He remains free on appeal. Indeed, as Mrs Kovesi told Emerging Europe in a recent interview, so successful has the DNA become that it was now a model for the region.

“This is not the end,” said Mrs Kovesi in a final press conference as DNA boss, surrounded by hundreds of prosecutors. “The fight against corruption will go on. It must go on: do not give up.”

Dan Barna, the leader of the opposition Save Romania Union (USR), said that Mrs Kovesi’s words should become a rallying call.

“I know that people are revolted, but now is not the time to abandon the cause,” said Mr Barna. “Now is not the time to stop fighting. In fact, we should redouble our efforts. Laura Codruta Kovesi is not giving up: she will remain a prosecutor. She continues to fight. We must continue to fight.”

The USR is currently campaigning for a nationwide referendum that would see anyone found guilty of corruption barred from taking public office. It also wants to see the constitutional court de-politicised.