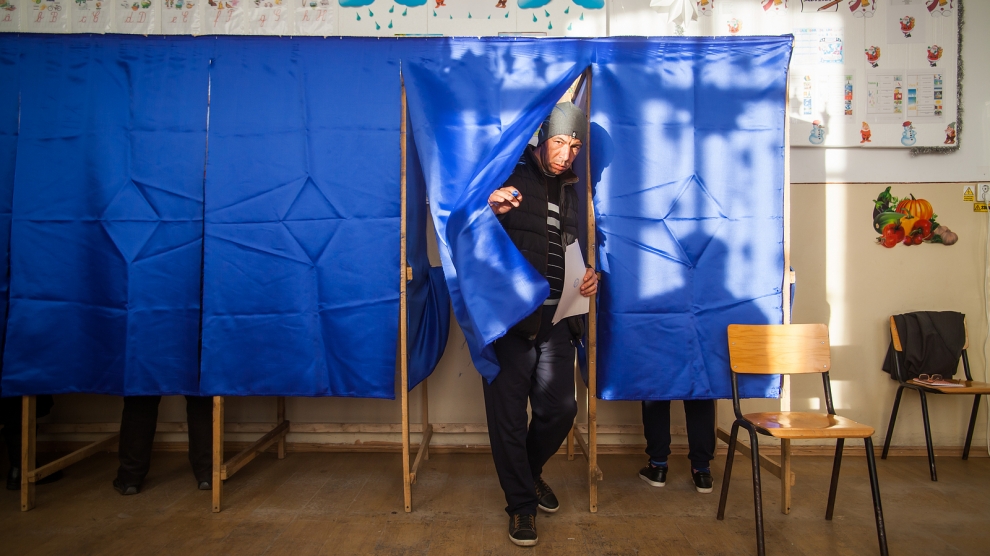 Romania’s ruling Liberal party looks set to win a parliamentary election on December 6 but is unlikely to take enough seats to govern alone.

Fewer than 40 per of Romanians bothered to vote in the country’s last parliamentary election, in December 2016, and many of those who chose to stay at home soon came to regret their decision.

In January 2017, less than a month after taking office, the country’s newly-installed government, led by the Social Democrats (PSD), passed emergency legislation pardoning corrupt politicians, officials and business people, as well as decriminalising acts of corruption involving sums of less than 200,000 lei (around 40,000 euros).

The response from civil society – including many who had neglected to vote – was swift. Romanians took to the streets in record numbers, and after a week of protests, which at their height saw more than 200,000 people gather in front of the government building in the capital Bucharest, the PSD backtracked and annulled the ordinance.

Despite this strategic retreat, many Romanians realised, too late, that by not voting in the election they had handed the PSD – which benefits from low turnout due to its powerful election-day machine that can be relied upon to get out its core vote better than other parties – a free pass.

Their fears were well-founded. The PSD’s attacks against the rule of law did not end with its ultimately failed bid to pardon hardened criminals and legalise corruption. Over the next three years – until it was removed from office at the end of 2019 following the imprisonment of its leader and architect of the 2016 election victory, Liviu Dragnea – it slowly chipped away at the justice system piecemeal, drip-feeding various pieces of legislation through a compliant parliament it dominated.

Magistrates, judges and prosecutors had their wings clipped. Evidence acquired via the use of wiretaps was effectively made inadmissable, ending thousands of active investigations.

The PSD’s biggest coup however came in July 2018 when it managed to remove Laura Codruța Kövesi, the enormously successful (and hugely popular) boss of the country’s anti-corruption unit, the DNA, from office. It came too late came to save Mr Dragnea, however. He had been sentenced to three years and six months in prison a few weeks earlier for his role in a scam that saw the local council of his home county of Teleorman pay the salaries of PSD party workers.

Ms Kövesi meanwhile has since been appointed the European Union’s chief prosecutor, although not without the PSD attempting to prevent her getting the job.

Ever since the 2016 election – in which it took almost 46 per cent of the vote – the PSD has seen its support plummet, in part as a result of its attacks on the justice system and the fact that it is viewed by many in Romania as soft on corruption, but also due to its mismanagement of the country’s economy. In 2019’s European parliamentary elections the party took just 22.5 per cent of the vote, its lowest score at any election since the Romanian Revolution of 1989.

Its candidate for president, former prime minister Viorica Dăncilă, suffered a humiliating defeat against incumbent Klaus Iohannis later in 2019, while in September of this year the party barely topped 23 per cent in local elections.

The largest beneficiary of the PSD’s fall in support has been Mr Iohannis’s Liberal party (PNL), which has spent the last year at the head of a minority government led by Prime Minister Ludovic Orban.

“It has done relatively well, given all the constraints and hindrances the coronavirus pandemic has brought, and has avoided populist decisions,” says Claudia Postelnicescu, a Romanian lawyer and political consultant.

Romania has in effect however had two, parallel governments over the past 12 months: Mr Orban’s executive, which has had to pass much legislation via emergency decree, and the PSD, which still broadly controls parliament and has been able to steer through increases in pensions and child support payments the country can ill afford.

Turnout will again be crucial

All three elections in which the PSD has been resoundingly defeated since winning in 2016 however saw relatively high turnout, approaching 50 per cent. With Romania currently in the grip of a second wave of the Covid-19 pandemic that is far more severe than the first, some analysts are concerned that low turnout may again boost the former ruling party. Sunday’s election will also be the fifth time that Romanians have been called to the polls in little over 18 months.

Nevertheless, several opinion polls suggest a relatively high turnout, says Postelnicescu. “However, if the polls are manipulated, as we have seen in the US elections recently, then the turnout will be much lower.”

While the PNL looks set to take victory on December 6, it is highly unlikely that the party will take much more than 30 per cent of the vote and will therefore be unable to govern alone. A difficult year has also probably left it unwilling to lead another minority government.

Its most probable coalition partner is the Save Romania Union-Plus (USR+), which came close to beating the PSD into third place in the European elections of 2019 but saw its support dip below 10 per cent in the recent local elections. USR+ did not stand candidates for all local councils however so its score was not a true reflection of its popularity, which opinion polls currently suggest is nudging 20 per cent.

The PNL and USR+ are not natural partners, and have spent much of the electoral campaign (which has been muted, perhaps understandable given Covid-19 restrictions) attacking each other, and not their common enemy, the PSD.

The PNL – much of whose leadership is deeply conservative – views USR+ as an upstart bunch of neo-Marxists, while the USR sees the PNL as little different to the PSD, and not genuinely committed to bringing about the institutional reform that Romania so badly needs.

Both sides are exaggerating.

USR+ is undoubtedly Romania’s most progressive and liberal party but its leadership is staunchly pro-market (perhaps too much so for its greener wing) while the PNL – though it does contain some who might be called political dinosaurs with little appetite for real reform – is not the PSD.

“They are fighting for the same electorate,” says Postelnicescu. “The PNL wants to grow in Bucharest, USR+ wants to extend its reach in the rest of Romania. Both parties will insist on naming the prime minister, and the leaders of both parties have already promised lots public positions to party activists. The fight between them will be ferocious and [coalition] negotiations bloody.”

The post of future prime minister is particularly sought after as whoever fills the role is likely to be the front runner in the next presidential election, in 2024 (Mr Iohannis must step down at the end of his second term).

“Both parties want the position, so we will witness a long, enduring drama unfold until the new government is established,” adds Postelnicescu. “However, they will be forced to cohabitate and work together, and that could end up being a good exercise – particularly for USR+, a party until now mostly of words and few deliverables.”

Beyond the fight for the prime minister’s job, other stumbling blocks in coalition talks are likely to be USR+’s demands for a zero rate of income tax for those on the minimum wage, an end to the high pensions paid to former civil servants, and the introduction of a ban on those convicted of corruption from holding public office.

The party will also want assurances that the PNL is committed to digitalising Romania’s overly bureaucratic public services and opening up the creaking state health monopoly to competition. On the latter issue at least, there does appear to be common ground. Both parties have also committed to building new infrastructure: motorways in particular.

In the end, however, the PNL and USR+ will have to co-exist, not least as there may be few other options. Indeed, it could well be that the PNL, USR+ and PSD are the only parties to gain the five per cent of votes needed to secure seats in parliament.

The Popular Movement party (PMP), led by Traian Băsescu, a former president, which has moved sharply to the right in recent months, took just over six per cent in September’s local election but currently polls below five per cent.

It has not been helped by the nomination of Băsescu’s youngest daughter Elena, who previously served a stint as a gaffe-prone MEP, as its leading candidate in the port city of Constanța, while another controversial candidate, the Trumpist firebrand Mihail Neamțu, heads the party’s list in the western county of Timiș. The former president himself, often the party’s biggest draw, is not standing for election, and has been unusually quiet throughout the campaign.

Pro Romania, a party led by a former prime minister, Victor Ponta, took less than five per cent in the local elections and may also struggle to make the parliamentary threshold. Its membership is made up almost entirely of former members of the PSD (including Mr Ponta himself) and it has been unable to shake off a reputation as being a PSD offshoot, despite adding another former prime minister, Călin Popescu-Tăriceanu, once the leader of the PNL, to its ranks.

There is also this year the real possibility that the Hungarian Democratic Union (UDMR) – which represents Romania’s Hungarian minority and has been a coalition partner of almost every government since 1989 – will not make the parliamentary threshold. It too took less than five per cent of the vote in the local elections.

Once supported en bloc by Romania’s Hungarian minority, the UDMR has seen support slowly move towards the Hungarian People’s party (PPMT) over the past decade: this time, the PPMT may take enough votes to deny the UDMR its place in parliament.

In emerging Europe, the public have been frozen out of green recovery plan consultations
Covid-19 is accentuating the need to bridge digital divides
Comment