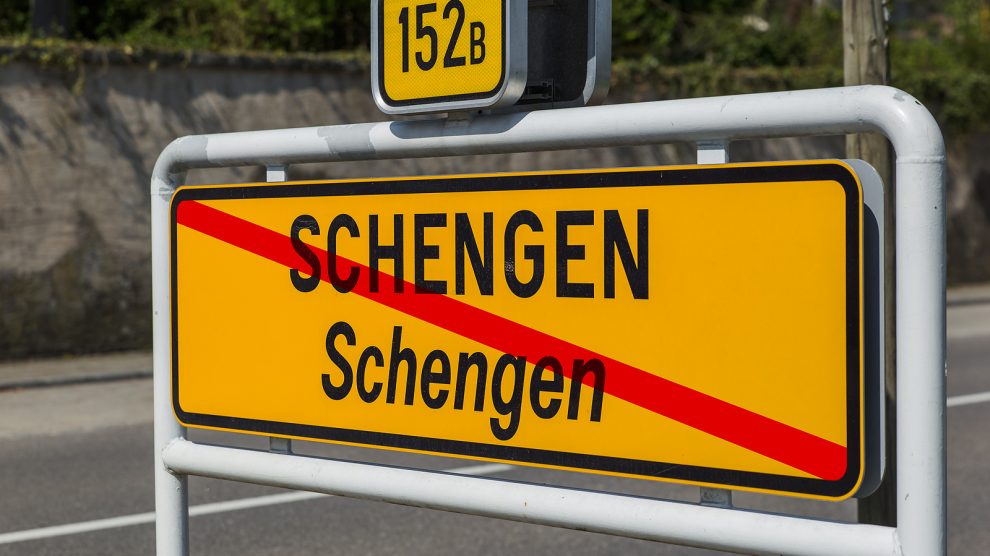 By not supporting the Baltics and Poland in their righteous quest to enact draconian travel curbs on Russians, Brussels has inadvertently set in motion the undoing of Schengen as we know it.

The East-West divide over shunning Russian tourists adds to a long list of irritants that call into question both the rationality and survival of the EU’s borderless travel zone, Schengen.

Thanks to the likes of France and Germany which pour the Russians a drink with one hand and judge them with the other, the watered down version of an outright tourist visa ban that much of Central and Eastern Europe has rooted for amounts to a mere slap on the wrist.

There are still ways and means for the Kremlin’s foot soldiers to get to almost any destination they so choose within the bloc.

The European Union has made it seem as if it has taken a tough enough stance on Russia by suspending a visa facilitation agreement and closing its airspace. As things stand, the only additional bureaucracy Russian applicants will have to undergo is paying 45 euros more in consular fees and submitting a few extra documents such as bank statements and no-objection certificates (NOCs) which can be retrieved in a matter of minutes.

In terms of getting to Europe by air, Muscovites remain spoilt for choice with aviation hubs like Istanbul, Dubai and Tbilisi, to a lesser extent, at their disposal.

Western heavyweights, who happen to be the de facto decision-makers in Brussels, fail to wrap their heads around the degree to which incoming Russians imperil national security in the East.

Concerns raised by bordering countries are not just borne out of animosity towards the aggressor, but the plausibility that the Russian security service, the FSB, could easily use humanitarian grounds as a pretext to infiltrate the continent with its operatives and other nefarious figures. It goes without saying that were such a sinister plot to materialise, former Warsaw Pact nations would emerge as Moscow’s lowest hanging fruit.

Even Finland appears to have a soft spot for Russian émigrés despite being unsuccessfully strong-armed by Russian President Vladimir Putin to withdraw its bid for NATO membership.

Droves of cars with Russian license plates breeze through checkpoints with few questions asked, so long as valid documentation is presented to Finnish border guards.

Unless Europe gets its act together and all member states are on the same wavelength with respect to containing Russia, the already protracted war will continue to rage on with no end in sight. Now is not the time for any double dealings or balancing acts, as fighting-age and testosterone-fuelled Russian males look set to flood the EU.

Following Putin’s mobilisation announcement last week, the haphazard manner in which eligible recruits have absconded en masse goes to show that the Russians are nowhere near as patriotic or allegiant as they make themselves out to be.

In many ways, the sheer aversion most of them have towards participating in the war differs starkly from how heroically ordinary Ukrainians took to being called up. It is worth recalling that men and women alike throughout the country had no qualms about abandoning livelihoods and taking up arms to defend their motherland.

As such, it should hardly come as any surprise that annexed territories are slowly but surely being recaptured by Kyiv. Another reason why slamming the EU’s door shut on Russians ought to be favoured over stricter entry requirements is because the overwhelming majority of alleged “tourists” are not simply heading to Europe for a weekend getaway but plan to linger around aimlessly until the war draws to a close.

With Russia’s economy in tatters and much of the erstwhile middle-class having been driven into destitution, most newcomers will not have the wherewithal to keep their heads above water for months on end.

There has been an erroneous and meritless contention by closet Kremlin apologists in the EU that imposing a visa ban on Russian visitors during the off-season will have a trivial impact.

Needless to say, this school of thought could not be further from the truth. Russia is an especially miserable place to spend winter given that daily temperatures plummet to well below freezing while daylight remains scarce and shops close much earlier than their standard operating hours.

Most salaried workers in the country opt to go on annual leave during the November to February window when the weather is at its harshest. Denying Russians the Mediterranean sunshine they crave and forcing them to face the music at home could precipitate domestic civil unrest at this crucial juncture.

Demonstrations are already underway across Moscow and St Petersburg, opposing mandatory military service. Combine this with the blistering cold, travel constraints and living hand-to-mouth, civilians will essentially have their backs against the wall and nothing more to lose. It is now or never as far as taking concrete action and influencing the outcome of the war are concerned.

Keeping Russians out is the EU’s silver bullet to bringing about regime change from within rather than giving those who are supposed to be on the frontlines a free pass. These next few months could either make or break Ukraine depending on how shrewdly the West plays its cards.

There are still a multitude of countries in the Global South which Russian passport holders can frequent unhampered, many of which boast a year-round tropical climate and a sinfully low cost of living. It would be in the best interest of Europe, as a collective, to identify the most sought-after vacation hotspots and actively disincentivise them from welcoming Russians.

The Maldives, Sri Lanka, Morocco and Tunisia are some notable examples over whom the EU still has a great deal of clout. With these sanctuaries no longer accessible and the Central Asian republics beginning to adopt an overtly hostile attitude towards their ex-colonisers, it will be Russia as opposed to Europe that faces an exceptionally unbearable and bleak winter.

Enlistment efforts are, by no means, solely concentrated in the big cities but extend all the way to far-flung Siberia. This impoverished and neglected region is viewed as fertile ground by the Russian government whose inhabitants are much easier to indoctrinate and bait with blood money.

Nevertheless, ongoing protests in the westernmost metropolises risk morphing into a pan-Russian resistance movement as and when indigenous Siberians see through the Kremlin’s disproportionate scouting of their lean mean fighting machines.

A similar argument holds for Central Asian migrants being hoodwinked into the war in exchange for Russian citizenship. Little do they know that this cursed passport is becoming more worthless with each passing day and thereby not worth putting their lives on the line for.

From the standpoint of a third-country traveller, the very concept of invisible borders and free internal movement is an absolute godsend. The ability to traverse the length and breadth of a continent as diverse and stepped in history as Europe with a mere sticker in one’s passport still comes across as being too good to be true. That said, friction between its constituents at different ends of the political spectrum coupled with a series of recent geostrategic challenges exacerbated by eliminating checks and balances cast serious doubt on whether or not Schengen can remain actionable for much longer.

Infringing on the sovereignty of independent nation states to the point that they have no discretion over who enters their territory was always going to be a recipe for disaster which came home to roost in 2015.

At the indirect invitation of then German Chancellor Angela Merkel, millions of economic migrants from the MENA region as well as Sub-Saharan Africa and South Asia made their way to Europe under the guise of refugees. Rampant migration persists to this day as practically anyone fleeing poverty from the aforementioned geographies can submit a bogus asylum claim in their first port of entry and venture onwards to more prosperous jurisdictions while their request is under study.

Having miraculously withstood the people smuggling crisis that added impetus to Brexit and the coronavirus pandemic which saw all mobility privileges thrown out of the window, the European Union is now confronted by a behemoth seeking to expose cracks in its model.

Wily Russian adventurers use visas issued by a given member state which they perceive as the weakest link to end up in an entirely different nation where they are not always welcome. It is absurd that once Romania and Bulgaria become part of the Schengen Area, its visa holders will have the right to spend time in Scandinavia or Switzerland instead where the minimum means of subsistence demanded is significantly higher.

Supporters are turning on Putin like there is no tomorrow after being summoned to partake in a needless war that has rendered Russia’s army an international laughing stock. To offset the abject failure in Ukraine and breathe life back into his dying brand, the self styled tsar could take aim at an increasingly fragmented Europe.

Right-wing populists sweeping to power across the continent serve as Moscow’s Trojan horse in their shared abhorrence of the European Union. By not supporting the Baltics and Poland in their righteous quest to enact draconian travel curbs on Russians, Brussels has inadvertently set in motion the undoing of Schengen as we know it.

There is no telling how far the Eastern bloc will go to restore regional stability, even if it entails walking away from an experimental project in denial and a self-proclaimed superstate digging its own grave.

The opportunity of remote work and the ‘Human Cloud’
Russian football pays penalty, but mobilisation means the West must introduce harsher sanctions
Comment