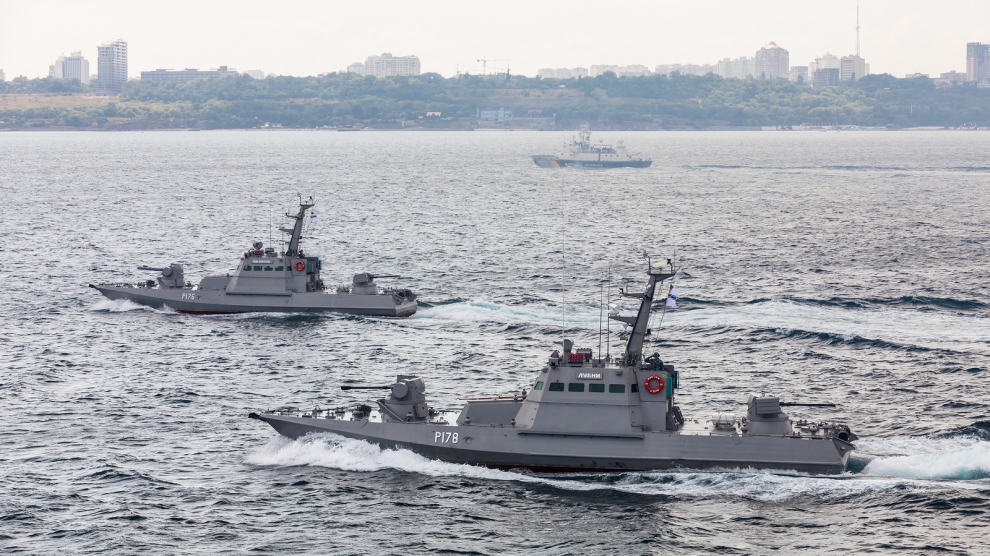 Ukraine’s president Petro Poroshenko called for a declaration of martial law on November 26 following Russia’s illegal seizure of three Ukrainian navy vessels in the Sea of Azov. Mr Poroshenko said the move was intended for defensive purposes and would not imply a declaration of war. Russian security forces opened fire on three Ukrainian naval ships in the Kerch strait on November 25 in the most serious escalation between the countries since Russia’s invasion of Crimea in 2014. The strait – a narrow passage between Crimea and the Russian mainland – provides the only maritime access to the Sea of Azov, jointly administered by Russia and Ukraine.

The hostilities began when Russia prevented the three Ukrainian navy vessels from passing beneath its bridge over the strait by blocking their way with a cargo ship.

Several Ukrainian sailors were reported to have been wounded in the skirmish, but Russia’s FSB security service said none were in a serious condition. A total of 23 Ukrainian navy personnel have been taken captive by Russia.

The Ukrainian navy claimed it gave all notifications required by international maritime rules before the three vessels left Odessa for Mariupol, a port on the Sea of Azov close to the eastern part of Ukraine controlled by Russian-backed separatists.

The head of the Ukrainian Orthodox Church, Patriarch Filaret, has called on the Ukrainian people for unity in the face of Russian aggression. “The Russian Federation has committed an open act of aggression against Ukraine, which is no longer hidden,” he said. “The Ukrainian people can only give one response to the attack – to bravely confront the enemy, standing up for the defense of their native land, for the defense of their statehood and freedom.”

In October, the Ukrainian Orthodox Church was granted autonomy by the Ecumenical Patriarch of Constantinople, Bartholemew, much to the annoyance of Russia.

NATO spokesperson Oana Lungescu said the organisation had called for “restraint and de-escalation”, and supported Ukraine’s “navigational rights in its territorial waters.” She also called on Russia “to ensure unhindered access to Ukrainian ports in the Azov Sea in accordance with international law.”

The seizure of the three Ukrainian vessels sparked protests by hundreds of people outside the Russian embassy in Kyiv. Some placed paper boats outside the residence while others threw smoke grenades and set fire to tyres piled up outside.

Pavlo Klimkin, the Ukrainian minister of foreign affairs, said it was “likely that Russia plans further acts of aggression at sea or on land” and that Ukraine must be prepared.

Mr Proshenko’s call for martial law comes four months before a presidential election that he is expected to lose. If Ukrainian MPs vote to suspend normal government, the election could be postponed, prompting some of his opponents to question whether Mr Poroshenko was trying to exploit the incident for political motives. Martial law was not declared after the Russian invasion of Crimea.

On the markets, Ukraine’s dollar-denominated sovereign bonds have fallen steeply while the cost of insuring exposure to Russia’s sovereign debt jumped amid the heightening tensions between the two countries.

Meanwhile, the governor of the National Bank of Ukraine, Yakiv Smolii, has assured Ukrainians that the introduction of martial law will not affect the operation of the country’s banking system. “I’d like to say that the decisions that will be made [on the introduction of martial law] will in no way affect operations of the banking system,” said Mr Smolii.